The following quote by Dennis Weaver sums up the motivation behind choosing this topic: “We don’t have to sacrifice a strong economy for a healthy environment”.  It can be argued that in the new technological era, it might actually make it stronger.

Focusing  on  a  compelling  research,  that  covers  all  the  aspects  of  interest  in  the  area proposed for  analysis, the current paper underlines a series of novelty factors. An important first  distinction  is  found  in  the  two  sides  of  the  research  that  will  merge  to  answer  to  the proposed questions. From the Belt and Road Initiative point of view, we can definitely say it is the only international project of this magnitude. Even more interesting are the international implication  of  Belt  and  Road  Initiative  and  its  vast  planned  expansion.  From  ‘The  Paris Agreement” perspective we are facing a bindery agreement that aims to produce a series of significant effects.

Looking  at  two  new  approaches  in  terms  of  international  project  development  and transboundary environmental protection, the impact of each of them is highly projected onto the  other  one.  The  novelty  of  the  research  lies  in  seeing  the  two  concepts  side  by  side  and looking into their convergence.

About the research background, it should be stated, that while there are some specific papers written strictly about the Belt and Road Initiative and `The Paris Agreement`, in order to properly cover the proposed research topic, the focus had to fall on what has been written before  the  decisions  were  made.  From  China`s  ascension  –  reaching  such  an  incredible economic growth and its subsequent  need to improve  existing infrastructure  and to globally expand  it,  therefore  proposing  a  project  like  `Belt  and  Road  Initiative`,  to  how  the  world countries came about to understand the need to prevent the alarming climate change and how does `The Paris Agreement`  proposes to support the process, there  are  countless approaches and perspectives to look into these subjects.

It  is  important  to  analyze  and  properly  explain  how  the  two  topics  brought  into discussion are fundamentally different concepts. On one hand, we are talking about a public policy of global magnitude - `The Paris Agreement`; on the other hand, we are looking into a global  project,  mainly  focused  on  a  transboundary  infrastructure  construction  (though  the other  aspects  should  not  be  ignored,  such  as:  international  collaboration,  international investments,  new  emerging  international  entities  who  act  as  International  Organizations  and many more).

Firstly, in order to understand the origins of the two key concepts of the paper, studies that  show  how  they  came  about  have  to  be  taken  into  account.  In  the  case  of  `The  Paris Agreement`: it can be the United Nation reports and subsequent decisions on combating the effects  of  climate  change;  it  can  also  be  about  the  distinction  of  using  the  format  of  an international non-binding agreement, rather than a binding international treaty, but making it binding  by  its  finality;  or  the  Millennium  Development  Goals  that  can  stand  in  for  the importance and herculean work behind the adoption of `The Paris Agreement` as part of goal number seven `ensure environmental sustainability`[65]. While for the Belt and Road Initiative the research starts from information about Silk Road, as well as factors that led China to such point  in  history,  where  it  could  financially,  politically,  logistically  to  propose  such  an Initiative.

Both subjects discussed in the paper are relatively new (compared with topics such as economy, management, engineering, international law). This leads to the need to explain the topics from an academic point of view, stating with what they mean, how they operate, what it involves and so on. Furthermore, both the Belt and Road Initiative and `The Paris Agreement` involve a series of particularities, as well as addressing many classic domains, such as those up  mentioned  (economy,  management,  engineering,  international  law).  For  this  reason  it  is required a short presentation of each topic, with an extent explanation of their particularities (for example: while there are many infrastructure projects around the world, some at a huge scale, not many are transboundary infrastructure projects  – passing from country to country, which leads to a series of important particularities).

a) One Belt One Road Initiative

While  on  two  official  visits,  back  in  2013,  in  Astana,  Kazakhstan[23]  (at  the Nazarbayev  University)  and  in  Jakarta,  Indonesia[24]  (at  the  Parliamentary  gathering)  the President of People`s Republic of China, Xi Jinping, presented the idea of the One Belt One Road Initiative. The name was later officially changed to what is now known as the `Belt and Road  Initiative`,  it  can  be  described  as  a  global strategy  for  infrastructure  development in around 70 countries (the number is different depending on the source) adopted in 2013 by the Chinese  government.  One  of  the  sources  says  that  the  Initiative  “involves  more  than  100 countries and over 60% of the world's population”, the authors naming it a “magnificent, yet experimental initiative”.

The  next  paragraphs  focus  strictly  on  the  conceptual  framework  in  order  to  paint  a comprehensive understanding over the linkage between the key concepts of the research. The graphic below tries to visually explain the theoretic part.

The world`s experts gathered in a  series of general meetings and some  specific ones and  reached  an  agreement  that  the  current  state  of  the  world  it  is  not  where  it  should  be  in accordance  with  its  full  potential.  They  have  agreed  upon  a  series  of  public  policies  with global effect, starting from the Millennium Development Goals (MDG/MDGs).[65] At its core, the eight goals of the MDG require economic growth and environmental protection, under a larger  spectrum.  Afterwards,  the  Sustainable  Development  concept  was  elaborated  and expanded on as a need to express that both major goals have to be achieved at the same time and not one on the expense of the other. In order to see the goals achieved, the international community  (countries  officials,  experts,  politicians,  theoreticians,  scientists)  developed  a framework,  the  Sustainable  Development  Goals  (SDG/SDGs),[63]  to  keep  track  of  the development, as well as  use it as a reminder of the major, universal goal. Based on all this, and probably influenced by the new trend of conducting the international relations, the result was the adopting of `The Paris Agreement`. 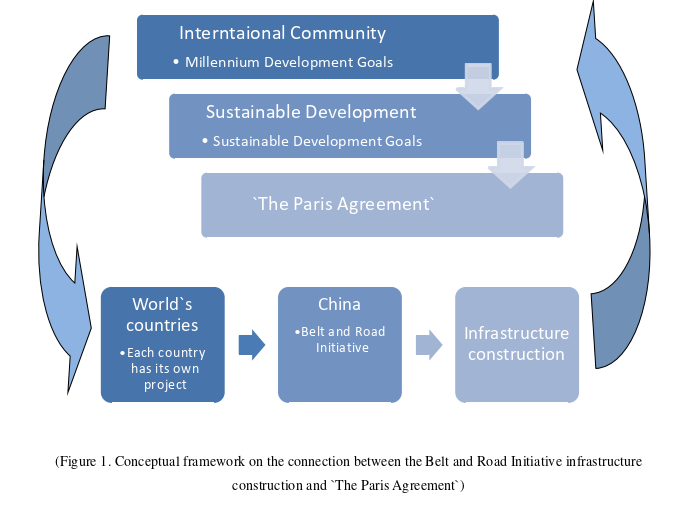 CHAPTER 5 DISCUSSION ON THE CONNECTION BETWEEN THE TWO MAIN CONCEPTS

5.1 Correlation between Belt and Road and `The Paris Agreement`

Countries started submitting their Nationally Determined Contributions (NDCs) after `The Paris Agreement` was ratified by enough parties. Belt and Road Initiative, as China’s first  transboundary  economic  and  development  infrastructure  project,  covers  more  than  70 countries.  The  combined  primary  energy  use  of  the  states  across  Belt  and  Road  Initiative, account for 50.8% of the global energy consumption. Whether or not the countries involved in the Belt and Road Initiative can successfully implement their NDCs “will be critical to the global efforts to achieve the 2 and 1.5 degree goals”.

The international community remains cautious towards Belt and Road Initiative due to the concerns that China`s goal is to move the outdated and excess industry abroad in order to focus on the new, innovative technology, without losing the economic value of the first ones. There  are  also  concerns  regarding  the  wide  scale  of  the  Initiative  and  the  covered  targeted region, which is  considered environmentally-fragile. Another contingency point comes from the  potential  environmental  impacts  of  investments  in  countries  with  inefficient environmental laws and  unstable governance.  In  order to assuage these concerns, China has been using various dialogue platforms, both domestic and international, to reaffirm its goal of aiming towards a “green, healthy, intelligent, and peaceful” Belt and Road. Furthermore, the cooperation  mechanisms  set  in  place  show  China`s  intention  to  work  alongside  the international  community  to  meet  the  Sustainable  Development  Goals.  President  Xi  Jinping also  declared that “taking a driving seat  in  international  cooperation to  respond to  climate change, China has become an important participant, contributor, and torchbearer in the global endeavor for ecological civilization”. 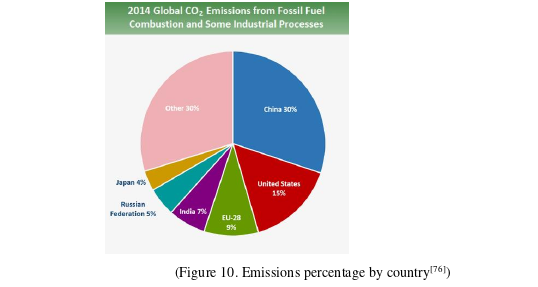 The  present  Master`s  thesis  focuses  on  a  delicate,  complex,  mainly  theoretic  and slightly  controversial  topic.  “`The  Paris Agreement`: Ally  or  Impediment  for  the  Belt  and Road Infrastructure Construction” brings into discussion two smilingly contradictory subjects which  are  expected  to  have  a  major  universal  impact.  This  paper  brings  together,  in  an interdisciplinary  theoretical  research,  a  global  wide  infrastructure  development  project,  Belt and  Road  Initiative,  a  flagship  programme  of  the  People`s  Republic  of  China  and  a transboundary  environmental  protection  document,  `The  Paris  Agreement`,  a  flagship programme of the United Nations.

The research analyzes in depth each of the two topics, individually and continues with a  holistic  approach  over  the  juxtaposition  of  the  two.  The  third  and  forth  chapters  set  the premises  for  the  two  projects,  as  well  as  explaining  from  their  respective  perspectives  how they  influence  each  other.  The  specific  characteristics  of  the  Belt  and  Road  Initiative  (a project  proposed  by  one  country,  which  produces  effects  on  a  global  scale,  with  a  special focus on the infrastructure sector, found in the third chapter) and `The Paris Agreement` (an international non-binding agreement by its formation and structure, but binding by its content, found in the forth chapter) led to the necessity of analyzing them together. The juxtaposition of the two topics is  analyzed in  the fifth chapter, alongside the leading position of China  in both areas of interest and the opportunities that can arise from the linkage of the two topics.