Chapter One An Overview of the Project

1.1 Introduction to the Project

The syllabi of Spanish and German majors mainly introduce the coursecategories, course objectives, course functions and some teaching methods. There aresome major issues and difficulties when the author conducts translation, such as thetranslation of proper nouns, long sentences, and German language.

Firstly, the syllabi for Spanish and German majors are the brainchild of allteachers involved based on the painstaking efforts . The translation of the syllabi canpromote the dissemination of their informed perspectives on and deep insights intoteaching designs of various courses, including teaching objectives, teachingprocedures, teaching concepts, etc, which can best benefit not only the translatorherself but also novice and foreign teachers. Besides, the English version of the syllabi made available on the internet can help to increase the popularity of the wholeuniversity.

1.2 Process of the Project

Secondly, after the analysis of the sentence structure, the author has found thatthe source text is mainly formed by long sentences such as “课程的目的在于使学生熟练掌握西班牙语语音，学会西班牙语的基础词汇用法和基本语法等方面的知识；培养学生听、说、读、写、译的基本技能和初步的言语交际能力；掌握一般的西班牙语国家的国情知识和文化概况，从而为今后的学习打好基础。”, whichrequires the translator to have a mastery of some related skills including analyzing primary and secondary relationship between different components to achieve theexpressiveness of the text.

Thirdly, with the growing national strength of China, the cultural exchange andcommunication with the outside world have become increasingly frequent, so thatvarious parallel texts in English are available now, which means that the author cancompare the parallel texts with her own translated version to avoid any mistranslation.

Finally, the author has searched for the studies and papers of scholars at homeand abroad so as to lay a good foundation for this project report.

Terminology refers to a set of appellations that express different concepts in aparticular subject, generally in the form of nouns. A terminology can be a word or aphrase, which is used to correctly mark things, phenomena, characteristics,relationships, and processes in various fields. Professor Feng Zhiwei (2019) believesthat the terminology is "a conventional symbol that expresses or qualifies professionalconcepts by speech or characters". Terminology has different attributes in differentranges, which is related to their functions. The function here is the social function oflanguage, that is, the role of language in human social life. In this sense, the mostimportant function of language is communicative function (Ye Qisong, 2011:61).

In terms of the systematic feature of the terminology, which means that the statusof each term can only be specified in the whole concept of the profession, nounterminology in syllabus refers to nouns about the subject field, including theabove-mentioned course name, course category, teaching method and otherprofessional vocabulary.

In translation, we can dispart hereinafter terminologies: course name, coursecategory, teaching method and other professional terminology. 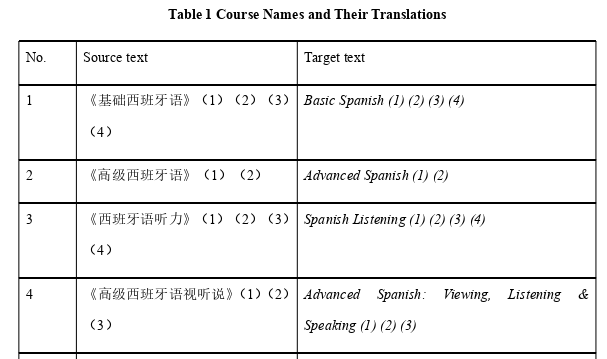 From the perspective of the source text, the syllabus is a relatively unique text with aconcise and rigorous structure and a large number of professional terms, whichrequires careful treatment by the translator. From the perspective of culturaldifferences between China and foreign countries, Chinese and English are verydifferent, not to mention education, which is a field that both sides attach greatimportance to, and there are inevitably differences in educational concepts andteaching methods.

Table 5 illustrates that many Chinese expressions contain the same word “能力”,which obviously can not be translated into the same English word. Therefore, totranslate “能力” into a proper English word according to the specific context poses abig challenge to the author. By doing enough independent research and consultingteachers, the author discovers that the Chinese word “能力” can be translated inthree different ways: first, translating “ 能 力 ” into “ability” directly; second,replacing it with synonyms like “skills” and “competence”; third, omitting thetranslation and rearrange the order so as to avoid the repetition and redundancy in thelanguage. This translation approach is well aligned with the principles of FunctionalEquivalence Theory. 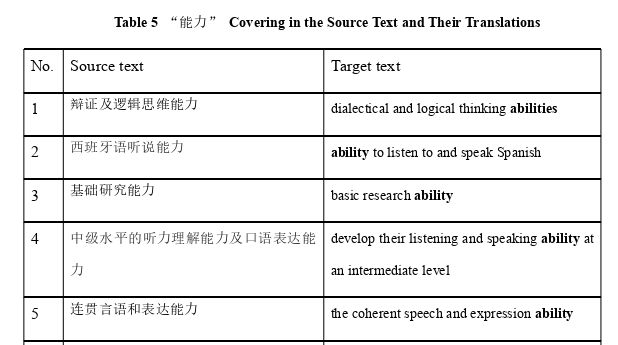 Eugene A. Nida is a famous American linguist, translator and translation theorist.Nida became a Christian at an early age and devoted his academic life to thetranslation of the Bible. In the process of translating the Bible, Nida advocated hisown theory of translation from the perspective of linguistics on the basis of the natureof translation, which made an important contribution to the translation field.

In the early 1980s, with the development of China's reform and opening uppolicy, Nida’s translation theory began to be introduced into China by Chinesescholars, which gave the Chinese translators the opportunity to get in touch with thewestern translation theories systematically and also triggered a heated discussion inthe domestic translation circle. To some extent, Nida’s theory of “functionalequivalence” has made a great contribution to the development of translation work inChina, and has provided a great guiding significance for the translation practice inChina.

Based on the English translation of “Course Introduction” and “Course Objective” inthe 2020 syllabi for Spanish and German majors of School of Foreign Languages &Cultures in NNU, the project report performs the following three functions: first, itcontributes to the teaching development of SFLC, and to the dissemination and widerapplication of the syllabi; second, it tentatively summarizes the characteristics andtranslation methods of course syllabi, which lays a good foundation for the follow-upresearch and study; third, the author has improved her own translation ability, learneda lot of translation skills, and accumulated enough experience to be exposed to moretext types in the future through the translation practice.

In this project report, the author first introduces the background and significanceof the project, the categories of course terms, and then lists the major issues anddifficulties of the project, the causes and the solutions. The solutions are mainlydirected to the problems concerning the translation of words, phrases and sentences.

Based on the personal experience in this translation project, the author hopes toshare some experience on how to translate informative texts such as syllabi. First ofall, the translator must have a good command of both English and Chinese languagesin order to render high-quality translation. Secondly, the translator needs to be fullyprepared before getting down to translation itself and acquires sufficient backgroundknowledge covering fields such as education, language and culture. By making fulluse of online resources, books, papers and other reference materials, a translator cando a good job in the preparation stage. Finally, in order to achieve high quality intranslation, the translated version should be polished over and over again throughproofreading, revising, and comparing, as well as consulting experts, supervisor andteammates.