Powered by global economic integration, the researches on language transfer arebecoming more and more popular at home and abroad. As far as existing researches areconcerned, the researches mostly focus on the transfer of Chinese (L1) on the acquisition ofEnglish (L2), which only involve two languages. However, in the current economy andsociety in China, it is not able to meet the requirements for Chinese learners that only masterChinese and English. Faced with such a situation, it is essential to learn a third language forChinese learners on the basis of mastering Chinese (L1) and (L2). Learning a third languageor even more languages has become a big upsurge in today’s society. Under this background,the study of language transfer on third language acquisition has attracted more linguists’attention and has made many achievements.

With the deepening of Sino German cooperation, more and more Chinese learners beginto choose German as their third language. At the same time, some problems appeared in theprocess of German acquisition. For example, what influence do the acquired two languageshave on the acquisition of German (L3)? Which language’s vowels have more influence onGerman (L3) vowels? Chinese (L1) or English (L2)? It is impossible to explain thesequestions based on the previous research results. Therefore, the researchers need to furtherconsider the transfer of English (L2) as well as the transfer of Chinese (L1) on the acquisitionof German (L3).

Taking Chinese students whose L2 is English and L3 is German as subjects, this studyuses the method of speech experiment to analyze their German vowel pronunciation, with theaim of exploring the transfer from L1 and L2 vowels on L3 German vowel sounds. Through finding out the transfer causes and putting forward suggestions for teaching and learning, thestudy aims to fully promote positive transfer and inhibit negative transfer in the future processof German vowel sounds acquisition.

This study has both theoretical and practical values.

In terms of the theoretical values, the study may provide new insights and conclusionsfor further researches of third language acquisition. The findings of this study are expected todeepen and widen the researches of German (L3) teaching.

In terms of the practical values, the study has positive meaning for both teachers andlearners. On the one hand, some implications are put forward to help German teachers graspthe key and difficult points in the process of German (L3) acquisition. On the other hand, theresults of the study may provide some suggestions for Chinese learners to make full use of thepositive transfer and overcome the negative transfer in the acquisition of German (L3) vowelsounds.

The three factors of the height of tongue, the anteroposterior position of the tongue, andthe spread of the lips could determine the types of each vowel. The analysis of vowel systemis mainly based on these three aspects, which is benefit to understand the pronunciationcharacteristics of languages.

Thirdly, the spread of the lips: When pronouncing vowels, those with loose lips arecalled unrounded vowel, while those with round lips are called rounded vowel.

According to the above three factors, a vowel tongue bitmap could be drawn aiming toprovide an objective basis for comparison when determining and describing the tongueposition of the vowels. Besides, the vowel system may be clearly displayed in the voweltongue bitmap. 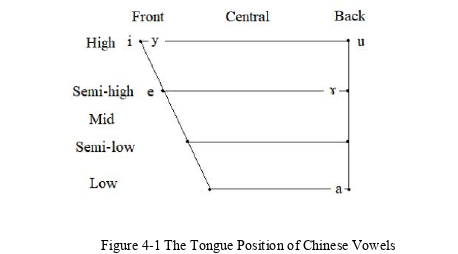