Traditionally, academic discourse is regarded as a reflection of objective and independent research facts and a relatively static display of academic achievements (Mauranen & Bondi, 2003). Academic language is therefore objective and static, avoiding the intervention of the author’s subjective feelings and attitudes. Furthermore, in the writing of academic papers, due to genre reasons, authors should follow certain academic norms to ensure the formality of their papers. However, the reliability of academic writings comes not only from the rationality of scientific discovery but also from the discourse persuasion of the authors’ argumentations (Jiang & Hyland, 2020). The data results are not self-evident but need to be presented to readers by authors in a convincing way with rationale language.

Based on Corpus of Contemporary American English (COCA), the present study aims to explore distribution characteristics of stance adverbs in academic English and its two disciplines that are Humanities and Science/Technology (Sci/Tech) from 1990 to 2019, and find the similarities and differences between Humanities and Sci/Tech as well as the functions of stance adverbs used in these two disciplines. This study, therefore, intends to answer the following three research questions:

1) What are the characteristics of stance adverbs used in academic English and its two disciplines over the past 30 years?

2) What are the similarities and differences in the use of stance adverbs between Humanities and Sci/Tech?

3) What are the functions of stance adverbs used in Humanities and Sci/Tech?

This section starts with the definitions of stance and then presents the concepts related to stance which will shed light on a better comprehension of “stance” discussed in the present study.

The definition of stance is an issue in the field of linguistics, scholars in the semantic and pragmatic circles have maintained a strong interest in stance. Numerous linguists (Biber & Finegan, 1988; Ochs, 1990) have made special research on stance, which provides a favorable reference for people to deeply understand this important language phenomenon. However, due to the differences in academic background, interest, and research perspectives of scholars, so far, the academic circles have not reached an agreement on the definition and connotation of stance.

The concept of “stance” is first put forward by Biber and Finegan (1988), Biber and Finegan (1988, p. 1) define stance as “overt expression of an author’s or speaker’s attitudes, judgments, or commitment concerning the message,” Biber and Finegan (1989) broaden their analysis to lexical and grammatical markers of stance, and define stance as the lexical and grammatical encoding of both evidentiality and affect (speakers’ emotions, feelings, and moods). Biber et al. (1999, p. 966) further supplement the indication of personal stance of the speaker or writer to express “personal feelings, attitudes, value judgments, or assessments.” Furthermore, according to Biber et al. (1999) and Conrad and Biber (2000), in addition to epistemic stance and attitudinal stance as put forward before, another notion under the concept of stance is added, namely, style stance. Biber (2006) also gives a description of stance, in his description, to express stance is to convey varieties of personal assessments and feelings, including attitudes about how a writer or speaker gets certain information, how certain he or she is about the veracity of the information, and what aspect the writer or speaker is talking. 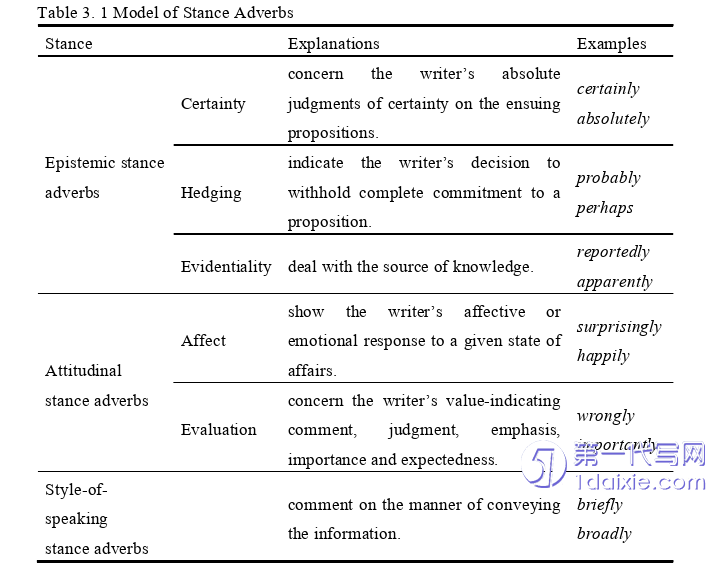 4.1 Characteristics of Stance Adverbs over Time

Based on the COCA corpus and Xu’s (2007) framework of stance adverbs, the present study explores distribution characteristics of stance adverbs in academic English and its two disciplines that are Humanities and Sci/Tech from 1990 to 2019, and investigates the similarities and differences between Humanities and Sci/Tech as well as the functions of stance adverbs used in these two disciplines. Findings of this study are summarized as follows, which are arranged according to the structure of the three research questions in the present study.

(1) Characteristics of Stance Adverbs over Time

In terms of the overall characteristics of stance adverbs over time, the use of stance adverbs in academic English has decreased significantly in the past 30 years with a decreasing rate of raw frequencies reaching 27.82% and a decreasing rate of normalized frequencies reaching 23.46%, wherein the decline from the second decade to the third decade is more significant than that from the first decade to the second decade. The overall downward trend over the past 30 years shows that academic authors still tend to hide their identity instead of expressing their identity more overly in order to avoid taking responsibility for the accuracy of a proposition or conclusion.