Over the last twenty years or so, two strands of discourse studies, multimodal discourseanalysis (MDA) and critical discourse analysis (CDA), have emerged and attractedconsiderable attention. The former, multimodal discourse analysis (MDA) “explores themeaning-making potential of different communication modes and media and their actual useand dynamic interaction with each other and with the socio-cultural context in which theyoperate.” (Djonov & Zhao, 2014: 1) The latter, critical discourse analysis (CDA) is concernedwith “the relationship between language and power by studying how communication concealsand legitimizes, or reveals and even subverts social boundaries, inequality, and political orcommercial agendas.” (ibidem)

The media has long been a focus among researches of these both strands, which offers afertile ground to explore “how different semiotic resources can be employed to perpetuate orchallenge prevailing sociocultural beliefs, stereotypes, and norms” (Djonov & Zhao, 2014: 2).And Van Dijk (1988) points out that media discourse is the main source of people’sknowledge, attitudes and ideologies, both of elites as well as of ordinary citizens. As aparticular genre of media discourse, news report is complex blend of national, social,economic and linguistic tradition and it is now becoming more and more popular to use textswith photos to attract and hold wider readership among news publication industry, which callsfor sophisticated and more comprehensive analysis on both meanings of photos and theirinteractions with accompanying verbiages.

1.2 Significance of the Study

(1) The thesis is a trial of applying both MDA and CDA to exploring stance underneathverbal-visual displays in LightBox of TIME, which is relatively seldom studied from the angleof linguistics before. The majority of previous researches mainly concern news reports only inthe verbal form. Thus, this thesis will not only supplement the current MDA and CDA studies,but also contribute to broadening the scope of these two strands. In addition, it proves thatvisual is not stance-free. On the contrary, visual can express stance and interact with verbal tointensify the value of stance.

(2) This thesis will test the feasibility of the proposed theoretical framework, drawing onvisual grammar and appraisal system, to analyze stance in and across different modes.

(3) Practically, this thesis aims to provide readers a new perspective of or a differentapproach to reading the verbal-visual displays and promote readers' concern about currentevents. 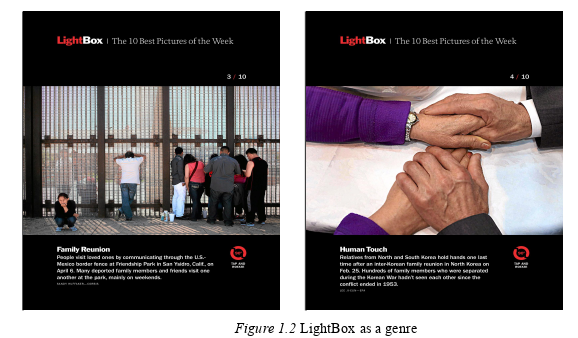 Stance concerns the author's attitudes, feelings, judgments, or commitment regarding tothe proposition (Biber & Finegan, 1989), and adverbials, such as adverbs, prepositionalphrases and adverbial clauses, are the main tool to express it. There are six semanticcategories of stance, namely, manner of speaking, approximation, conviction and certainty,actuality and emphasis, possibility and likelihood, and attitude. As the encoding of both affectand evidentiality, such as emotions, feelings, moods, etc, stance is often seen in four registers:conversation, news, fiction and academic prose. Based on this research, the notion of the term‘stance’ was further broadened into three semantic categories: epistemic stance, attitudinalstance and style stance (Biber et al., 1999). Accordingly, epistemic stance indicates thespeaker or writer’s comments on certainty, reliability, limitations of a proposition, and sourceof information, and is associated with both modality and evidentiality. Attitudinal stanceconveys the speaker or writer’s attitudes, feelings and value judgments, including“evaluations and emotions of all kinds” (Biber et al., 1999: 974). Style stance is concernedwith the speaker or writer’s “comments on the communication itself” (Biber et al., 1999: 975).

Multimodality, or MDA, defines the ways in which different semiotic resources such aslanguage, color, dress, and gesture are concurrently deployed in communication across arange of overlapping spheres such as politics, art, education, and everyday interactions(Kaltenbacher, 2004).

Initiated by the research conducted by Kress and Van Leeuwen (2006), the research ofMDA follows two interdependent directions. The first is concerned about mapping the historyand unique meaning-making potential of individual semiotic resources (e.g., visual design,action/gesture, typography). The second focuses on theorizing and analyzing the interactionbetween different semiotic resources in multimodal communication in specific social contexts.The main distinct researching approaches in MDA are the social semiotic one and theinteractional. The social semiotic approach lays foundation in Halliday’s (1978) theory oflanguage as a social semiotic, in which language is viewed as “one of the semiotic systemsthat constitute a culture” (1978 :2), interpreted “by reference to its place in the social process”(1978: 4) and modeled as a meaning-making resource in response to the three metafunctions itserves in society.

The focus on meaning, definition of culture as “a set of semiotic systems, a set ofsystems of meaning” (Halliday, 1985: 4), and model of the dynamic relationship betweenmodes have stimulated social semiotic theory’s expansion beyond language and apply itacross different modes and their interaction. It also addresses the ways multimodalmeaning-making reflects the interests of meaning-makers, their differential access to semioticresources, and the norms governing semiotic practices (Kress & Van Leeuwen, 2001; VanLeeuwen, 2005).

These four displays here each place a very large photo in the center, sandwiched by thecolumn title above and the headline as well as the caption below, and endow it a lead role in“ideologically foregrounding the meanings” (Kress and van Leeuwen, 2006) taken up by theverbiage below.

The display is a verbal-visual unit given careful consideration by producers in respectboth to pulling readers in and making sense at a glance, which deploys strategies (Economou,2009) commonly used to attract and quickly engage a mass readership in displays:

Striking design, most significantly comprising a large, prominent color photographand a large, bold headline above or below it

An image depicting a recognizable and controversial social actor likely to trigger astrong attitudinal response from readers, and a headline featuring a relatively explicit(inscribed or provoked) attitudinal meaning

Based on Halliday's systemic functional linguistics, Kress and Van Leeuwen’s thegrammar of visual design, and Martin’s appraisal system, this thesis draws on multimodaldiscourse analysis (MDA) and critical discourse analysis (CDA), as well as combination ofthese two strands of discourse analysis, to explore stance in visual-verbal displays inLightBox of Time Magazine, a genre now found across the popular news media. This papernot only examines attitudinal meanings in the verbal and in the visual separately, but alsoinvestigates the accumulated meanings and overall stance in the whole display. And the majorfindings yielded in the present study are as follows:

Firstly, speakers or writers have indefinitely many ways of expressing their opinions ---or rather, perhaps, of dissimulating the fact they are expressing their opinions (Halliday, 1985).Through the analysis of these displays, a genre like this kind of visual-verbal displays can beone of “indefinitely many ways” to do the job. The display, compositionally, placing aprominent photo in the middle, which makes it a salience and a Macrotheme of the wholedisplay, interacting with verbiage immediately under it, not only can attract and hold a widerreadership base, but also has consequences for the presentation of ‘objective’ stories.

Secondly, the application of verbal and visual appraisal system to displays in this paperreveals that choices made in the image and the verbiage can inscribe or provoke attitudinalorientations and evaluative meaning towards the participants they depict.

Finally, when accumulating the meanings of verbal and visual, their interaction andcooperation, the overall stance is “greater than the sum of the individual elements ofcontributions” (Royce, 2007: 27).