As is known to us, phonetics, vocabulary and grammar are the three fundamentalcomponents of the English language. When it comes to vocabulary, Wilkins (1972) holds thebelief that we can express nothing without vocabulary. Therefore, it is apparent that vocabularyserves as the most basic role among the three components. As form words of the Englishvocabulary, prepositions can not be overlooked as they connect words together to form sentences.Bander (1978) observes prepositions as frequently used words in English speech and writing. Ina word, people cannot communicate without prepositions and prepositions can’t be neglected.Prepositions, though simple in form and limited in quantity, can express abundant senses. Itmeans that the meanings of prepositions can not be understood only through the core orprototypical meanings. We need to derive the extended meanings based on the prototypicalmeanings and specific contexts. According to the traditional method of preposition teaching, thedifferent meanings of a preposition are unrelated to each other and the collocation of apreposition are fixed and conventional. When taught the different meanings of a preposition,students can not figure out the internal relation between the extended meanings and the coremeaning. They just mechanically memorize the meanings of a preposition one by one accordingto the given examples. However, it is easy for them to forget or confuse the different meanings ofprepositions. “Only less than 10% Junior EFL learners are able to comprehend and use themcorrectly” (Lindstromberg, 2001). Language researchers (Celce-Murcia & Larsen-Freeman, 1999)holds the belief that it is also challenging for second language learners to acquire Englishprepositions. As a result, the traditional method of preposition teaching increases the students’memory burden and results in students losing interest in English preposition learning gradually.We have to admit that the traditional preposition teaching method is not effective and it is atough task for English teachers to teach English prepositions. Therefore, new methods ofpreposition teaching are in urgent need.

In this part, concept, features and classification of image schema will be shown in detail.

Li (2007) holds the belief that image schema is so widely used that it is considered to be asignificant concept in cognitive linguistics. As far as Langacker (1987) is concerned, the term“image” stands for the occurrence of a perceptual sensation when the corresponding perceptualinput is absent. The “term” schema represents a structure or framework which is well-organized.The structure or framework is about objects and relations. The development of cognitivelinguistics contributes to the combination of the two terms. Thus, the new term “image schema”comes into being, which is a great advance in cognitive linguistics. However, different cognitivelinguists define image schema from a different perspective. Johnson, Lakoff and Langacker’sperspective to image schema theory is presented in this part.

According to Li (2007), it is Lakoff and Johnson that first propose the concept of imageschema. In 1987, the concept of image schema is put forward at the same time by Lakoff in hisbook The Body in the Mind and Johnson in his book Women, Fire and Dangerous Things.Johnson (1987: 14) claims that “An image schema is a recurring dynamic pattern of ourperceptual interactions and motor programs that gives coherence and structure to ourexperience”.

In this part, concept, characteristics, working mechanism and classification of conceptualmetaphor will be presented in detail.

4.1 Result and Discussion of Research Question One

In this part, a comparison between the experimental class and the control class in thepre-test is made to see whether the two classes are at the same proficiency level. A comparisonbetween the two classes in the post-test is made to test the effects of the new preposition teachingbased on the two theories. Independent sample t-test is used to mark these differences and makethis study more convincing.

4.1.1 Result and Discussion of Pre-test for CC and EC

In order to check whether there is significant difference between the control class and theexperimental class in English preposition learning, a pre-test is carried out before the experiment.The pre-test includes 50 items with 100 scores in total. The 50 items are multiple-choicequestions which all related to prepositions. Choose the best answer from the four given choicesfor each sentence. The various meanings of prepositions are manifested in these sentences. Thescores of the two classes are collected respectively as pre-test data. The data are analyzed withthe help of the software SPSS. T-test is used to test whether there is significant difference of thesubjects’ performance in the pre-test. The mean scores of these two classes are shown in Table4-1 and the result of the t-test for the pre-test is shown in 4-2. 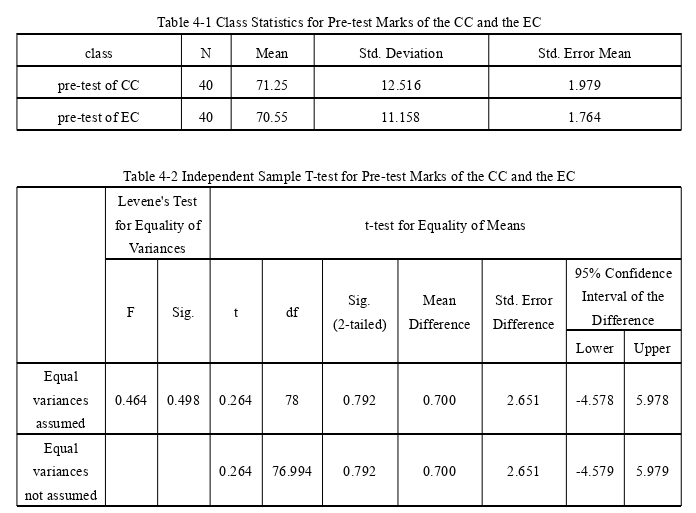 Second, most of the students in the EC take a positive attitude towards the Englishpreposition teaching based on the image schema theory and the conceptual metaphor theory.From the pre-questionnaire conducted in the EC before the experiment, it can be seen that almostall the students in the EC learn the various meanings of a preposition by rote before theexperiment. They can’t figure out the relations between the extended meanings and the core meaning. They just try their best to memorize all the meanings of a preposition through givenexamples. However, from the post-qustionnaire conducted after the experiment, it is clear thatthe students in the EC are very happy with the new English preposition teaching method basedon the image schema theory and the conceptual metaphor theory. They show great interest in thenew English preposition teaching method. With the help of the new method, students in the ECcan figure out the relations between the core meaning and the extended meanings of apreposition. They find it much easier to learn English prepositions with the new method. Moreimportantly, they expect to learn more prepositions and even other polysemous words with theimage schema theory and the conceptual metaphor theory.