1.1 Background to the Study

Never before has communication been so crucial to Mankind as the current Social media space. Many people are embracing technology and using mobile phones cheaply while growth in technology keeps on growing. The result of this is the transformed societies, economies, cultures, and even political space in the globe. Information Communication Technologies (ICTs) is changing the world in a manner never experienced since the industrial revolution. Information Technology is defining winners and losers in the new knowledge-based economy, can we afford to ignore it? The phenomenal growth of mobile phones in Kenya and many other developing countries thought to be too poor to afford the technology is proof that people believe it is crucial to their lives. 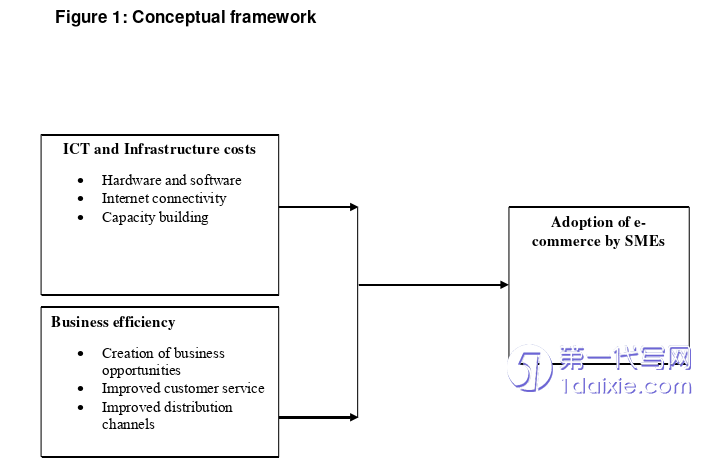 The advent of Internet-based electronic commerce offers considerable opportunities for firms to expand their customer base, enter new product markets and rationalize their business. Although problems of definition and measurement of electronic commerce make it difficult to gauge the phenomenon, available data indicate impressive growth in the rate of adoption of the Internet by small and medium-sized enterprises (SMEs) in a number of OECD countries. SMEs appear to be gradually bridging the gap in uptake in comparison with larger firms (OECD 2000).

1.2 Statement Of The Problem

In recent years, the exponential growth in ICTs and the resulting rapid emergence of electronic commerce have drastically been reshaping the business world. It was pointed out that e-commerce now has reached a phase ofchange where a revolutionary ideas becomes more evolutionary in nature (Lee et al., 2001). It has been estimated that the expenditures on ICT industries had been growing at about 8 per cent annually during the 1990s, and more than $2 trillion was spent worldwide in ICT industries alone in the year 2000 (Torre and Moxon, 2001). Commensurate with this trend, the volume of worldwide EC activities is expected to grow from $5,520 billion in 2001 to $11,999 billion in 2004 (Computer Economics, 2001).

Globally, SMEs are Considered as the engines of growth and development of Industries. This is because SMEs provide one of the most prolific sources of employment, not to mention the breeding ground for medium and large industries, which are critical for industrialization. For instance, the Kenya SME Country Study commissioned by the International Finance Corporation (IFC) reported an estimated 22,000 SMEs in the country employing over 3.2 million people. Representing 66% of all formally registered private enterprises, the SMEs accounted for 18% of the GDP. Eshun &Taylor (2008) have established that most of the SMEs non-traditional handicraft exporters in Kenya are at the e-mail adoption level. This is the take-up rates of ICT among firms. Levels begin with the use of e-mail and progress through web site development to the buying, selling and payment mechanism of ecommerce, with a few at the Internet presence. They further maintain that the most prominent challenge faced by SME’s is lack of government support in assisting them to adopt e-commerce and internet technologies in their day to day operations.

2.1 The Concept and Adoption of E-commerce

The modern world is known for its massive incorporation of IT infrastructure and systems. The modern-day definition of e-commerce supersedes its inherent structure as a simple means to the end for large corporations. Currently, e-commerce has become the new framework for business forcing investors and entrepreneurs to restructure their corporate organization and business models to respond to the new demands imposed by the market (Ferrera and Kessedjian, 2019). There is a shift where consumers demand more value comfort, reliability, and speed only possible through electronic trading. Electronic Business (e-commerce) is defined by Khan, (2016) as the buying and selling of goods and services over a computer network or even mobile phone network. E-commerce platforms have led to a simplified and effective consumer to business and the business to consumer processes, therefore perfectly augmenting the business processes (Samadi, Nogoev and Yazdanifard, 2011).  E-Commerce promotes an efficient and goal oriented evaluation for both the parties participating in the demand and supply sides. This is a result of wide range of avenues that it provides to both the sellers and the buyers. Okadapao, Omwenga, & Oboko (2016) argue that with the amplified use of the e-commerce, business platforms, particularly SMEs have received a big boost, thus ensuring that the SMEs survive.

The view that growth in developing countries can be achieved through the introduction of e-commerce in the small and medium enterprises (SMEs) among developing countries has been a subject of debate by various scholars (Li & Wang 2018).  The World Bank defines SME as small businesses of between 60 to 120 employees with an annual turnover of between Ksh 8 million and 150 Million’s are those enterprises that are not registered and do not comply with legal obligations concerning safety, taxes, and Labour laws. SMEs also refers to small to medium-sized businesses. They can be defined by three key main Words-Small, Single and Local. Small SMEs are small, either in terms of the number of employees. They have limited working capital and assets. The overall turnover of the enterprises is small, Compared to Larger Businesses. Most SMEs have a single owner who could also be the sole employee

The infusing of e-commerce into today’s SMEs in Africa result in the life blood of businesses according to Acheampong and Gyawu (2011). This reveals the relevant of e-commerce in small and medium enterprises.  From the view of Sandy & Burgess (2003), the e-commerce has taken a significant impact on SMEs in developing countries which Kenya is no exception.

This section discusses how representative the sample is to the appropriate SMEs used in the research study as per the E-Commerce adoption.

Therefore, this indicates that the number of small-businesses is higher than that of micro and medium businesses. Logically, that is an indication that small enterprises do not fully adopt e-Commerce. All of the enterprises chosen were importers, but only two did both importation and exportation. In simple words, two of the enterprises dealt with international trade while the rest three were local traders. The analysis was divided further to micro, small and medium businesses. The statement thus equates to simplicity. The number of micro-businesses retakes the lead because eleven of the companies are under micro businesses. So, it can be concluded that the majority of business enterprises are small. This is thus the real condition of SMEs in Bungoma County.

One 400 questionnaires that were administered in total, but 316 were the completed questionnaires representing a 79% response rate. This response is however the sample size estimated for the study. The questionnaire was well structured to address the predestined research objectives. The questions were well defined to allow for a more comfortable and more useful data collection process.

Four main factors were considered: business efficiency and costs associated with ICT, Infrastructure and technical skills, and awareness of the benefits of e-commerce, environmental factors, and e-commerce. According to the study results, 8 8% of e-commerce adoption b y Small and Medium-sized Enterprises in Bungoma is accounted for by employees regularly attending workshops to improve their computer skills (Alnaser, Saed, and Aleawashedh, 2018). This is followed by pieces of training on awareness of information technology tools at 87%. Additionally, the findings suggest that 87% of e-commerce adoption is determined by the e-commerce related infrastructure's affordability score.

On the awareness of the paybacks of e-commerce, the study findings revealed that the majority of the respondents were aware that the application of e-commerce in their businesses reduced business costs, led to customer reference, and increased business efficiency to a great extent. Concerning the cost of e-commerce, the majority of the respondents were categorical that it was very expensive for their businesses to have their websites to a great extent. They further indicated that computer maintenance costs were too high. Technical skills and IT knowledge of owners and staff is also critical in enhancing e-commerce adoption by formal SMEs in Bungoma County. The majority of the respondents were categorical that they knew how to use Microsoft office and how to use the internet.  However, they were categorical that their employees did not know how to use the internet and that they did not have knowledge of website maintenance.