1 Interpretation of Dream as Symbol: A Supplement to Energetics

1.1 Dream-Thoughts as Representation of Energetics of Desire

Dream-thoughts as the initial modality of dream is at first interpreted in order to conduct a direct connection with Freud’s postulation of unconsciousness, in which desire as forces constitutes Riceour’s critical supplement to Freud. If dream-thoughts can be connected with the concept “unconscious”, it should be first equipped with interpretability. Dream-thoughts, as the latent contents for a completed dream structure, is both unconscious and conscious. Although Freud did not give dream-thoughts a specific definition, it can be inferred that it is first related to human being’s sensory experience; that is, dream-thoughts consists of what human being see, hear, and smell, thus it provides material resources for the following procedures, like dream-work, manifest dream, and the formation of dream-texts. It therefore is conscious. Dream-thoughts, however, is characteristic of the unconscious as well, because not all of its contents can be presented as the manifest dream during oneiric activity. It means that what is not transformed into the manifest dream is unable to be perceived. Instead, what the manifest dream shows is derived from parts of the latent contents, for which this part of dream-thoughts has the chance of being recognizable and interpreted. In this way, dream-thoughts integrates the unconscious and the conscious, and paves a way for Ricoeur’s efforts to indicate Freudian topographical-economic concepts and their interconnection with mental reality. As a result, the section aims to explore Ricoeur’s interpretation of how dream-thoughts practice implying the interrelation between topography and economics. 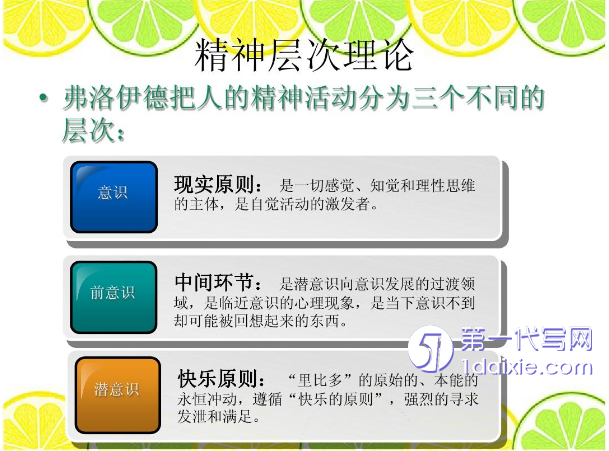 1.2 Dream-Work as Representation of Meaningfulization of Energy

Dream-work, as the preceding step of dream’s formation, tends to behave as Ricoeur’s further efforts to integrate meaning and force. With the preparation work of dream-thoughts, such questions as how the flow of energy provides dream-work with the ability to represent desire further, and how the intangible energy is meaningfulized, for which the semantics of desire comes to take shape, are analyzed in detail. The inconformity between dream-thoughts and manifest dream, or the betrayal of the constancy principle, is caused by psychical activities which can only be understood through interpretation with language, and such interpretations are “in”, instead of “out”, the psychoanalytic work. While with Freudian concepts, like “disguise”, “distortion”, “condensation”, and “displacement”, Ricoeur tries to criticize Freud’s unequal attitudes toward meaning and force within topography-economics. To some degree, Ricoeur thus “first analyzes psychoanalysis from linguistic perspective, bringing it into the scope of hermeneutics” (Gao 2004: 104).

In Ricoeur’s eyes, interpretation forms psychoanalytic discourse in that the interaction of force and meaning is based on the both disguise and disclosure features of these topographical and economic expressions. In this way, dream-work is Freud’s metaphorical attempts to prove psychical reality, and implies the potential conflicts among topographical modalities such as unconsciousness and consciousness, which will be interpreted in the following section. When energy, or desire as the driving force, is given meanings, it tends to develop a set of representatives to indicate its existence, and psychical phenomena and symptoms belong to the category of representation. Therefore, to interpret dream-work aims to analyze Ricoeur’s devotion to integrating force and meaning as the multiple meaning structure of symbol, which helps comprehend his diverting from psychoanalysis to language expressions, and finally to hermeneutics.

2 Interpretation of Text as Symbol: A Supplement to Freudian Regression of Analogy

2.1 Formal Progression in Schematization of Desire

Freudian regression lies in Freud’s view of art works as the realization of the artist’ wish fulfillment, showing that psychoanalysis provides art with “a secondary model of desire-realization” (Yao 2014: 84). Analogous to patients with neurosis, artists are taken by Freud as the patients whose works of art are interpreted as the psychical symptoms, in particular dreams. Thereby the interpretation of works of art is analogic to that of dream, which is what Freudian analogy means. While for Ricoeur, “it is not the dream as dreamed that can be interpreted, but rather the text of the dream account” (1970: 5). The transition from dream to text, therefore, is Ricoeur’s exploration on Freud’s psychoanalytic criticism on aesthetics. Freudian formal regression consists in that the analogy from dream to works of art shows an “[a]esthetic incentive” and “comes down to the purely formal pleasure produced by the artist’s technique in presenting his material” (Ricoeur 1970: 520). Works of art as the “analogues of wish-fulfillment” (Ricoeur 1970: 155), are the symptom repetition of artists’ regression to the conflicts in their minds. With an agreement on the functional continuity between dream and artistic creativity, what Ricoeur wants to criticize Freud is that in addition to a formal regression back to the schematization of desire, Freudian criticism of aesthetics implies a teleology, a progression that functions as an internal obedience of the pleasure principle, with which the topographical element “superego” participates in psychical mechanism and facilitates the deviations of libidinal objects. Therefore, the premise of supplementing a formal progression to Freud is to consolidate the theoretical basis of the desexualization feature of “sublimation”.

2.2 Temporal Progression in Realization of Fantasy

In addition to formal progression Ricoeur supplements to Freud, aesthetic works as the repetition of childhood memory and original libido behind unconsciousness inspires Ricoeur to give a supplement of temporal progression to Freud. Through the interpretation of desexualization of sublimation, Freudian formal regression of works of art as the schematization of desire is criticized by Ricoeur. The alteration of ego leading to the transformation from object-libido to narcissistic object makes, for Ricoeur, works of art free from the pure analogue of the repressed wish fulfillment to the extent that texts of works of art give human being inspiration of the dynamic transformation of self-consciousness. Nevertheless, it does not mean that Ricoeur exerts negation against Freud’s contributions to psychoanalysis because Freud has always been devoting himself to developing a system of metapsychology and psychoanalytic therapies rather than focusing on realizing aesthetic theoretical breakthrough. Instead, Ricoeur’s efforts to construct an internal relation between psychoanalysis and culture provide Ricoeur an inspiration to interpret how symbol obtains its basis in psychoanalytic discourse, hence taking psychoanalysis as hermeneutics of suspicion so that Ricoeurian reflective philosophy can be construed.

Analogous to dream, works of art as the daydream temporally implies a regression back to childhood fantasy, thus for Freud, works of art are the realization of fantasy, and fantasy, compensating for dissatisfactory reality, is motivated by the unsatisfied wish (2014: 88). Freudian realization of fantasy consists in that works or art are “the first figure of the daytime nocturnal, the first analogue of the oneiric” (Ricoeur 1970: 163). An illusionary world is created by artists in the same way as a game world created by a child where what they are fond of are recombined to display an imaginary world. In the case of “fort-da”, for instance, the little boy’s contradictory affections towards his mother are substituted by his control of a wooden reel, and his concentration on the game making the wooden reel appear and disappear repeatedly immerses himself into a game world, or a fictional world.

3 Interpretation of Discourse as Symbol: A Reflection on Metapsychology ......... 34

3.2 Irrationality and Rationality of Human Being in Adamic-Mythical Discourse . 39

3 Interpretation of Discourse as Symbol: A Reflection on Metapsychology

3.1 Instinct and Idea of Metapsychology in Totemism Discourse

When human being are exposed to totemism discourse, Ricoeur and Freud obtain the shared inspiration from religions and myths. Freud focused on an anthropological exploration on the sexuality and its derivation in the primary tribes because he defined totemism as “a system which takes the place of a religion among certain primitive peoples of Australia, America and Africa, and provides the basis of their social organization” (1950: 117), or a tribe in which a group of people hold a shared faith in one totem. It to some degree constitutes the archetypal pattern of religion. Ricoeur’s innovative supplement, however, consists in that when religious texts like totem and taboo are reinterpreted, the possibilities of obtaining new meanings and new understandings occur to human being’s mind. Religious discourse, therefore, on one hand, integrates tribal members and totem as a text, and on the other, unifies audience into the interaction. That is where Ricoeur has a successive interpretation of the symbols in religions and myths, as well as of Freud’s psychoanalytic interpretation of religion. Ricoeur’s meditation on human nature with regard to mythology during his early period and his exploration on Freud’s psychoanalysis are integrated, with his interpretation of symbol developed from a religious discourse to a cultural one. 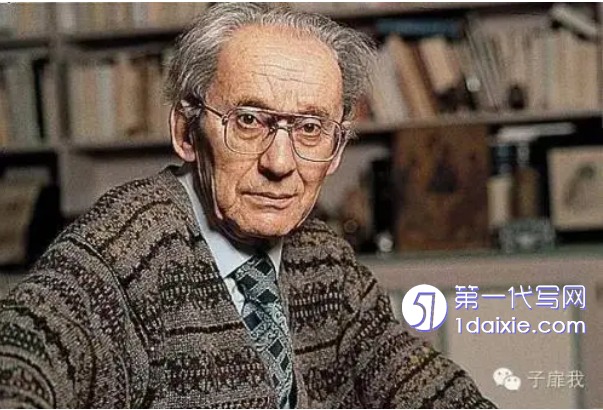 As the intersection of force and meaning, the interrelation between “instinct” and “idea” is dependent on the interpretation of “representation”, a mediation between the former two. There is no doubt that topographical-economic interpretation runs through the whole process of interpretation. Ricoeur deems that instincts, as the energy, or forces of desire, “are given in a psychical representative, that is, in something psychical that ‘stands for’ them”, meaning that the intangibility of instincts is represented by the intelligibility of the psychical representatives, among which idea is “a derived form of this ‘representative’” (1970: 134-5). Idea as “idea of something” is accordingly conscious and equipped with meaning structure, thereby able to be “signified and recognized, and thus become, with the help of a certain amount of work, conscious” (Ricoeur 1970: 137). Nevertheless, idea, in nature as one of the derivatives of instinct’s vicissitudes, is not autonomous in that such a psychical conflict is caused by the co-action of the pleasure principle and the reality principle, particularly id, or instinct, and superego, or external circumstance.

The thesis aims to analyze Ricoeur’s philosophical meditation on symbol, based on the interpretation of Ricoeur’s critical supplement to Freud’s psychoanalysis. Through the analysis of Ricoeur’s critique of Freud on three dimensions of dream, text, and discourse, the thesis indicates that interpretation of symbol roots in Freud’s psychoanalytic theories, and arrives at a conclusion that symbol, as both a multiple-meaning expression linguistically and an extra-linguistic referential medium to reality, leads human being to reflective dynamics. Within the reflective dynamics, Freud’s psychoanalysis is incorporated in Ricoeurian hermeneutics, particularly hermeneutics of suspicion and symbol. The thesis, therefore, shows Ricoeur’s devotion to categorizing psychoanalysis as hermeneutics of symbol and considering symbol in a reflective philosophical view.

Through interpretation of symbol, Ricoeur first manages to incorporate Freud’s psychoanalysis into hermeneutic field, exploring a detour toward hermeneutics. The thesis is conducted from epistemological analysis of phenomenology to reflective philosophy, through the analysis of oneiric phenomena to reflective existence. Beginning with exploring the duality of force and meaning in the structure of Freud’s psychoanalytic discourse, Ricoeur’s interpretation of dream aims to attribute the intelligibility of psychical mechanism to interpretation of meaning. In this way, Ricoeur supplements that psychoanalytic work roots in interpretation work, elevating interpretation of meaning on the same position with Freudian therapeutic exploration. Accordingly, interpretation of text constitutes Ricoeur’s supplement of progression to Freudian analogy from dream to art, and the thesis realizes further exploration on Ricoeur’s detour to hermeneutics through interpreting concrete and specific aesthetic creation. With Freud’s ambition to incorporate culture into his psychoanalytic framework, Ricoeur’s critique comes to explore the initial and primal modality of discourse, or contemporary audience’s interaction and communication with theological phenomena. By taking discourse as symbol, Ricoeur concentrates on supplementing Freudian pessimism a reflective philosophical view, concluding that human being’s self-reflection for new understandings constitutes the reflective philosophy of existence, which is future-oriented and optimistic.